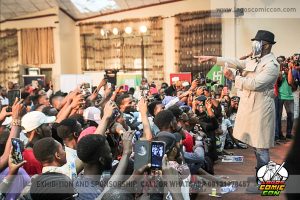 The Lagos Comic Con is an annual geek event organized by Mustardseed Communication International. It is in its 7th edition this year and has grown from 300 guests in 2012 into Africa’s biggest geek event with over 4000 guests in 2017 in a one day event. Lagos Comic Con has come to be trusted and embraced as the umbrella platform for the growth and nurture of Nigeria’s creative arts. No other event or platform in the whole of Africa brings together comics, games, animation, films and virtual reality under one festival roof. It is hence, an event targeted at geeks and nerds.

What stands LCC out from other events is the raw energy and excitement in the air during the event. All corners and zones are bustling with thrill. Lagos Comic Con is a geek marketplace on steroids; it is a Mecca for geeks just like you see in America at the San-Diego Comic Con. Over the years, LCC has driven growth and quality output in contents in the creative industry. This is because of the networking platform it presents where creators get to meet others who are doing amazing thing. Artists get to see what others are doing and go away challenged to step up their game.

Lagos Comic Con aside from exhibitions, awards, competitions and stage performances also hosts numerous workshops and panel discussions on industry relevant topics with speakers from all over the world.

This event is inevitable for a vibrant creative arts industry in Nigeria because of its ability to drive growth and impact the economy by raising employment rates. Lagos Comic Con also helps the Nigerian economy access foreign exchange by opening the global creative market to Nigerian artists. The seminars and workshops expose young Nigerians to modern trends in the industry and teach them how to compete favorably. With the impact LCC has made on these youths, we see young Nigerian artists today competing for foreign jobs on Fiver, Freelancer and other sites. This effect has drastically reduced the level of cyber crime induced by joblessness among Nigerians.

The role of the Lagos Comic-Con since its inception in 2012 has been to celebrate successes of practitioners in the Creative Industry (comics, animation, gaming, film and virtual reality), encourage broader participation and support the building of knowledge and capacity necessary to strengthen the sector and ultimately create jobs. This has involved working with creative professionals, policy makers, stakeholders and other industry experts to help facilitate wider understanding and awareness of the issues and opportunities available.

Lagos Comic Con has in the recent years been held on the mainland and in the last 2 years at NECA House, Alausa, Ikeja. In its seventh year however, Lagos Comic Con will be moved to Landmark event centre, Lekki. This move is necessitated by the need to have a larger event space to accommodate the 7000 and above attendees expected for the seventh edition. Furthermore, the Lagos Island geeks has over the years been calling for an edition close to home, and considering the demographic forensics on our registration data base after last event, we found the venue a fit to both drive in the crowd and sustain it.

The Lagos Comic Convention began in 2012 at Water Parks, Lagos. It had about 300 comic creators and enthusiasts in attendance. It had notable speakers like Shina Ajulo, MD of Spurdust (a leading animation company in Nigeria at that time),  Niyi Akinmolayan (Director of the movie, The Arbitration), Chike Ibekwe, a film maker who seats in the Jury of several film festivals in Africa.

In the second edition in 2013, it was held at Freedom Park, Lagos Island. Attendance was 1,216 and the rave was on high. There were even more notable speakers this time with some speakers in the maiden edition reappearing and several new faces like Tomy Davies, MD of Africa’s most widely selling comic series, Superstrikers, speaking extensively. There were for the first time an array of non comic related brands among the exhibitions.

The 2018 edition promises to be even bigger than ever. The theme for the year is Aspire. Dream. Prosper.

In 2018 which would mark its 7th edition, Lagos Comic Con  would be adding new zones, moving to a new venue on the Lagos island to accommodate the size of anticipated crowd of 10,000 attendees and also expand the seminar and panel sessions with more speakers and discussion subject matters that is broader and all inclusive.